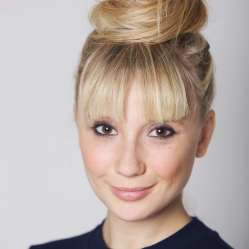 JENNY BEDE (As seen in Broadchurch, BBC Comedy Feeds, Watson & Oliver and Murder in Successville) Rising Star of 2015 - The Guardian Jenny Bede is absolutely set on a collision course with stardom. - Daily Mirror Rising Star - The Observer Inspired - The Daily Telegraph Hilarious - Metro Daring Comic- The Sun Her name is Jenny Bede and she is very funny - Heat If there was one act on the bill I would confidently tip for stardom it would be Bede - Bruce Dessau

RACHEL PARRIS ★★★★ "Beautifully crafted and performed...endearingly frank and funny...tears of laughter" - Guardian ★★★★ "A joyous story...effortlessly moving between poignancy and gags...an uplifting, life-affirming hour" - List ★★★★★ "The audience laughs until it starts to hurt...a perfect hour of comedy" - Broadway World ★★★★ "Brutally funny...a standout show" - Skinny ★★★★ "Hilarious...brings to mind the late Victoria Wood" - Whats On London ★★★★★ "Sometimes cynical, often rude, always funny. Great comedic timing and an irrepressible sunniness make for one of the nicest hours you could spend at the Fringe" - Shortcom ★★★★ "She has us hanging on her every word... One sometimes doubts that Britain's got talent, but Parris has it in spades." - ﻿﻿Guardian ★★★★ "As a proposition, Parris is in her Springtime" - Independent ★★★★ "Blonde, gorgeous, talented and very funny. Her delivery and timing are as precise and skilled as hand-etched glass. This is classy, clever, controlled comedy. Like all great comics, she can take the room where she wants...Uproarious." - Scotsman ★★★★★ "Parris is like a summer storm; sunny and playful one minute, dark and treacherous the next...Her comic timing is immaculate...mastery as an all-round performer" - Broadway Baby ★★★★ "Part Jay Z, part Queen V...Parris is disarming and original" - Fest Magazine ★★★★ "A brilliant comic conceit" - Three Weeks ★★★★ "Spot-on both musically and comically. A terrifically promising debut" - Edinburgh Evening News ★★★★ "delightfully provocative - makes you laugh your pants off" - Edinburgh Festivals Magazine ★★★★ "trademark sugar-coated darkness...will leave you with aching sides and a song stuck in your head" - Broadway Baby ★★★★ "clever, polished, and absolutely hilarious" - Broadway World