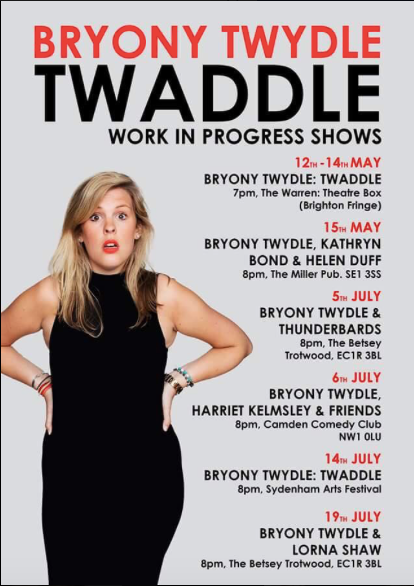 Bryony Twydle (New Comedian of the Year 2016 semi-finalist, Funny Women 'One to Watch 2016', BBC Radio 4’s ‘Sketchorama’, one fifth of award-winning sketch group The Jest) brings you some work in progress characters in preparation for her hour long show, alongside a stellar line up of other funny ladies! ★★★★★ (Views from the Gods) ★★★★ (LondonTheatre1).

BRYONY TWYDLE TWADDLE WORK IN PROGRESS Bryony writes characters - often based on people she’s met. Are you one of the people that Bryony’s based a character on? Well if you’re a crazed unorthodox speed awareness instructor, a small public school boy called Hector, or a Greek sex therapist with a very questionable accent you may well have been an inspiration for this show. Join Bryony as she presents her madcap collection of interrelated characters, like Sylvanian Families but less furry. Watch how she pushes her characters to their breaking points - and the audience’s boundaries too. ★★★★★ - View from the Gods ★★★★ - LondonTheatre1 ★★★★- ReviewsHub "Twydle pulls it off with aplomb." FunnyWomen

‘A hilarious combination of bashful and weird’- Three Weeks

‘Refreshingly original and she’s a seriously good writer’- Time Out