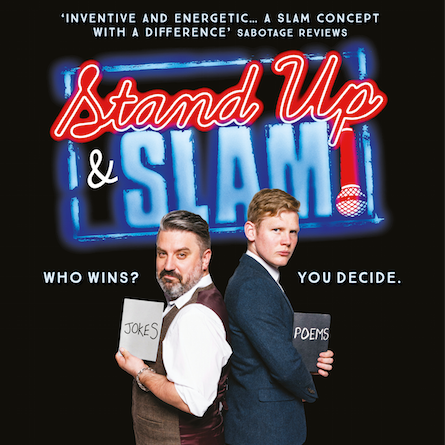 Six phenomenal acts go head to head for your approval as poetry and comedy collide with unexpected and hilarious results! Our resident team captains are joined by the most exciting comedy and poetry acts from around the UK. We’re mashing up the two art forms in an epic battle of spoken word. Who wins? You decide...

This month's line up is:

Press: ★★★★★ The Latest ★★★★★ The Argus ★★★★★ The Public Reviews ★★★★ Three Weeks Magazine ★★★★ Ed Fest Mag Fringe Review - Highly Recommended Show 'witty, fast paced, and most importantly funny.' - Fringe Review 'This is a great show, showcasing some real talent.' - Three Weeks 'edgy, energetic comedy at its best. Far funnier than your average prime-time fare' Sunday Express 'The crowd were in stitches, their roars delivered a 1-0 victory for poetry over stand-up and my preconceptions were suitably challenged.' - Mashable UK 'The result – well, it was decided by audience participation. But it didn’t really matter – the audience were the winners.' - The Reviews Hub